The most important function of the fume hood is the exhaust function. In the chemical laboratory, various harmful gases, odors, moisture and flammable, explosive, and corrosive substances are generated during the experimental operation, in order to protect the safety of users To prevent the pollutants in the experiment from spreading to the laboratory, use a fume hood near the source of pollution. 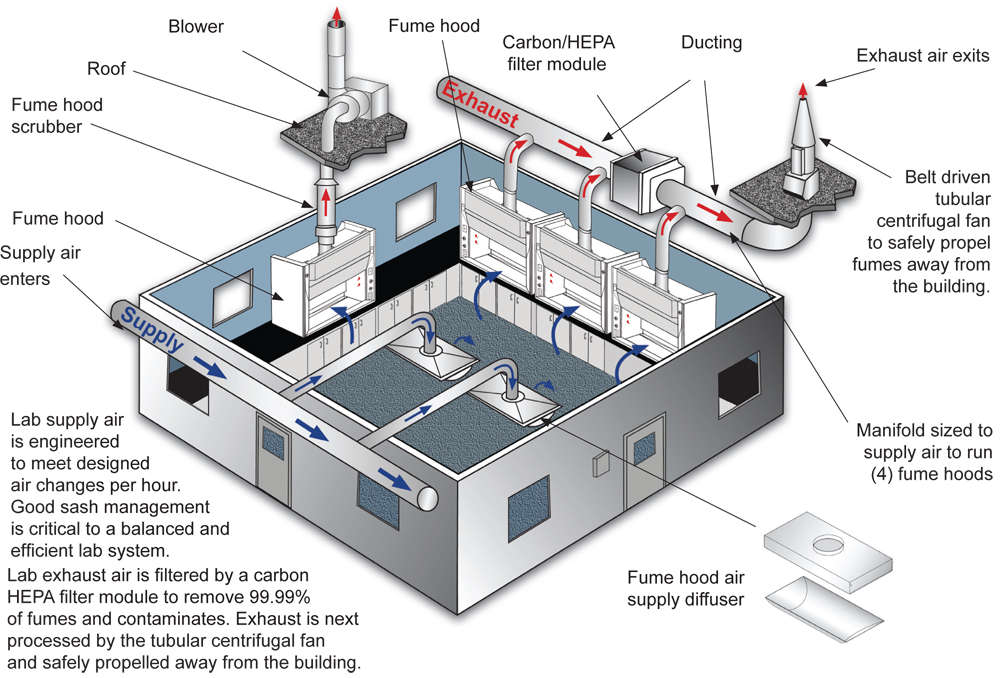 The new laboratory design is basically air-conditioned, so the number of fume hoods used must be included in the air-conditioning system plan. As fume hoods occupy a very important position in biochemical laboratories, the number of fume hoods in use is increasing day by day from the perspectives of improving laboratory environment, improving labor and hygiene conditions, and fume hoods to improve work efficiency. Following this is the ventilation ducts, piping, wiring, exhaust air, etc. have become important issues in laboratory construction.

The biggest purpose of using a fume hood is to discharge the harmful gases generated in the experiment and protect the health of the experimenters. That is to say, it must have a high degree of safety and superior operability. This requires the fume hood to have the following functions:

(1) Release function: It should be equipped with a mechanism for absorbing the harmful gas generated inside the fume hood by absorbing the gas outside the cabinet, diluting it and discharging it to the outdoors.

(2) Non-reverse flow function: The airflow generated by the exhaust fan inside the fume hood should have the function of preventing harmful gas from flowing into the room from the inside of the fume hood. In order to ensure the realization of this function, it is the best way to connect a fume hood and a ventilator with a single pipe. It cannot be connected by a single pipe, and it is limited to parallel connections in the same room on the same floor. Install the ventilator as much as possible. At the end of the pipe (or at the roof).

(4) Supplementary function: There should be a passage or alternative device for sucking in air from outside the fume hood when discharging harmful gas.

(5) Wind speed control function: In order to prevent harmful gases from escaping in the fume hood, a certain suction speed is required. The factors that determine the suction speed of the air intake of the fume hood are: the heat generated by the experiment content and the relationship with the number of air changes. The main ones are the content of the experiment and the nature of the hazardous substance. It is usually stipulated that the general non-toxic pollutant is 0.25-0.38m/s, the toxic or dangerous harmful substance is 0.4-0.5 m/s, the highly toxic or a small amount of radioactivity is 0.5-0.6m/s, and the gas is 0.5m/s, granular material is 1m/s. In order to ensure such a wind speed, the exhaust fan should have the necessary static pressure, that is, the frictional resistance when the air passes through the ventilation duct. When determining the wind speed, you must also pay attention to the noise problem. When the air flows through the pipe, the limit is 7-10m. Noise will be generated if the distance exceeds 10m. Usually the laboratory noise (indoor background noise level) is limited to 70dB (A). Increase the pipe The cutting area will reduce the wind speed, and also reduce the noise. Considering the cost of the pipeline and the construction problems, the power of the pipeline and the exhaust fan must be carefully selected.

(6) Heat resistance and acid and alkali corrosion resistance: some electric furnaces must be installed in the fume hood, and some experiments produce a large amount of toxic and harmful gases such as acid and alkali, which are extremely corrosive. The countertops, liners, side panels, and the selected water nozzles and air nozzles of the fume hood should all have anti-corrosion function.

fume hoods laboratory furniture anti-corrosion function
 Copyrights 2021 China Xicheng EP Ltd  All rights reserved. Technology by leadong .
We use cookies to enable all functionalities for best performance during your visit and to improve our services by giving us some insight into how the website is being used. Continued use of our website without having changed your browser settings confirms your acceptance of these cookies. For details please see our privacy policy.
×