How air pollution harms our health --WHO data

Air pollution is severe in many parts of the world. Nine out of ten people breathe polluted air, and the death toll caused by air pollution reaches 7 million every year. Up to one-third of deaths caused by stroke, lung cancer, and heart disease are due to air pollution.

Air pollution is everywhere. No matter where you live, you cannot escape. The fine pollutants in the air breakthrough our body's defenses, penetrate our respiratory and circulatory systems, and damage our lungs, heart, and brain.

There are two main types of air pollution: environmental (outdoor) air pollution and indoor air pollution. The latter is mainly caused by burning household fuels (coal, wood or kerosene, etc.) in poorly ventilated areas using open flames or inefficient stoves. Because the air is fluid, indoor and outdoor air pollution can affect each other.

About 3 billion people worldwide still use solid fuels (such as firewood, crop waste, charcoal, coal, and animal manure) and kerosene for cooking in open flames and inefficient stoves. Most of them are poor and live in low- and middle-income countries.

To ensure good air quality indoors and around homes, the "WHO Guidelines for indoor air quality: household fuel combustion" discusses the types of fuels and technologies that help maintain health, as well as strategies for effectively disseminating and adopting these domestic energy technologies, from a health perspective. Several suggestions were made. These recommendations draw on existing WHO outdoor air quality guidelines and WHO guidance on specific indoor pollutant levels.

The primary pollutants in the air include:

PM2.5 can enter the blood system through the lung barrier. Long-term exposure to these particles may increase the risk of cardiovascular and respiratory diseases, as well as lung cancer.

Ozone is a significant factor in causing asthma (or making the condition worse). Nitrogen dioxide and sulfur dioxide can also cause asthma, bronchial symptoms, lung inflammation, and decreased lung function.

More than 90% of children in the world breathe heavily polluted air every day, putting their health and development at serious risk. In 2016, 600,000 children died from acute lower respiratory infections caused by polluted air.

One reason children are particularly vulnerable to air pollution is that they breathe faster than adults and therefore absorb more pollutants. Also, the living space of children whose brains and bodies are still developing is closer to the ground, where some pollutants have the highest concentrations. 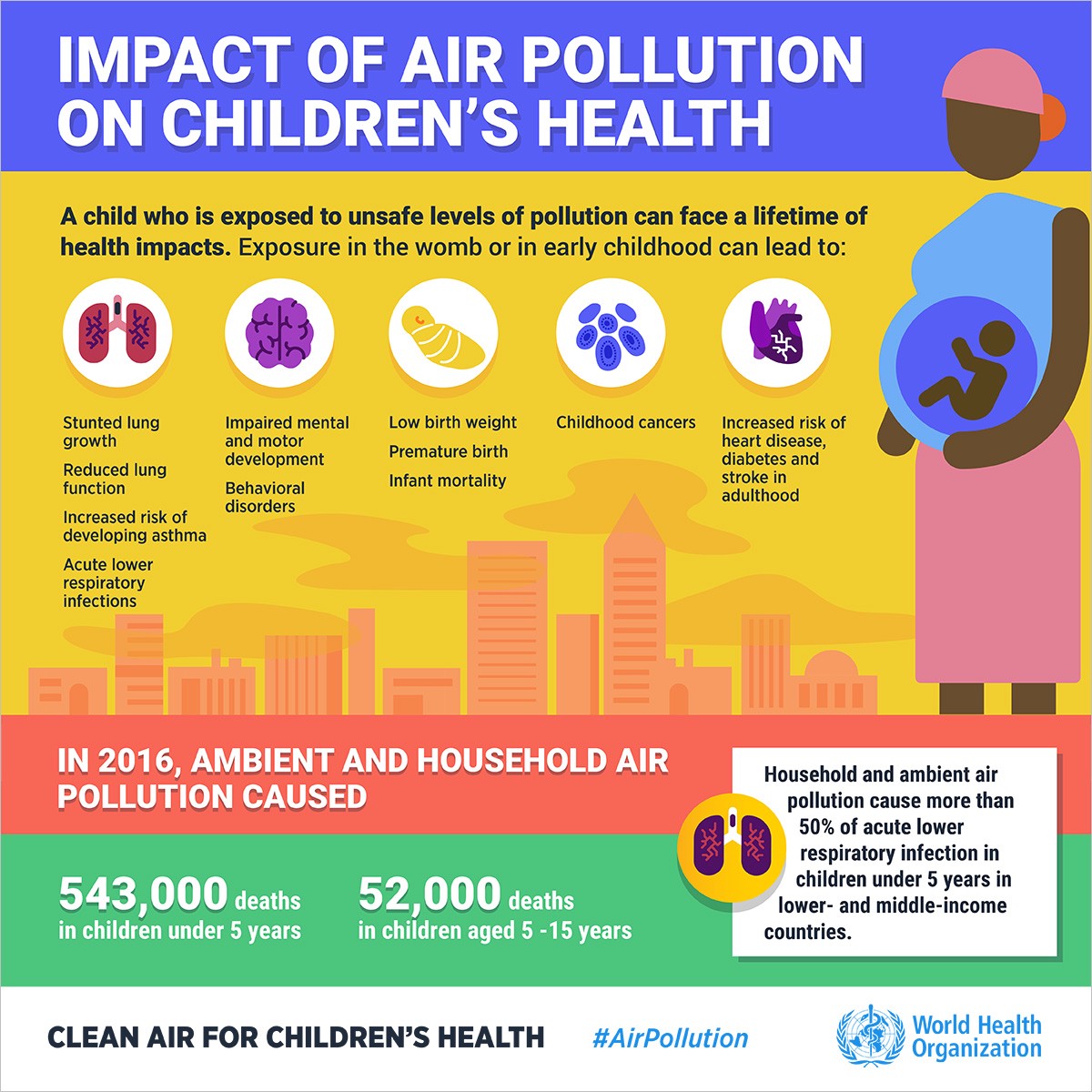 The WHO report entitled "Air pollution and child health: prescribing clean air" studies the serious impact of environmental (outdoor) and household air pollution on the health of children in the world, especially in low- and middle-income countries. The report clarified that if pregnant women are exposed to polluted air, they are more likely to give birth prematurely and give birth to thin babies with low birth weight.

Air pollution can also affect children's neurodevelopment and cognitive abilities and may cause asthma and childhood cancer. Children exposed to high air pollution levels may have a higher risk of developing chronic diseases such as cardiovascular disease in later life.

The "Breathe of Life" campaign jointly launched by WHO, UN Environment, and the Climate and Clean Air Alliance to Reduce Short-term Climate Pollutants is a global campaign aimed at better understanding the impact of air pollution on our health and the planet, To build a network of citizens, city and country leaders, and health professionals to promote community change to improve the air we breathe.

Actions that can save lives and help save the planet include raising vehicle standards, prioritizing clean public transportation and ways to promote physical activity, and using more efficient stoves and fuel alternatives for cooking, lighting, and heating.

Air pollution is closely related to climate change. The main driver of climate change is the burning of fossil fuels, which is also the leading cause of air pollution. The United Nations Conference on Climate Change warned that if we want to limit global warming to 1.5oC, coal-fired electricity must end in 2050. Otherwise, we may encounter a severe climate crisis in just 20 years.

Achieving the goals of the "Paris Agreement" means that by 2050, only reducing air pollution can save approximately 1 million lives worldwide each year. The health benefits of tackling air pollution are very significant. Among the 15 countries with the most greenhouse gas emissions, air pollution's health impact is estimated to exceed 4% of their gross domestic product.

From October 30 to November 1, 2018, WHO and partners held the first Global Conference on Air Pollution and Health in Geneva to raise awareness of this growing public health challenge and share information about air pollution. The information and tools of health risks and interventions have brought the world together to work together to solve this problem.