In this way, photons of different energies can be generated by a special excitation light source, and the molecules of the odorous substances can be dissociated and excited under the bombardment of a large number of energy-carrying photons by the strong absorption of the photons by the odorous substances. The photons are used to decompose oxygen molecules in the air to generate free oxygen, namely active oxygen. Because the positive and negative electrons carried by free oxygen are unbalanced, they need to be combined with oxygen molecules to generate ozone. 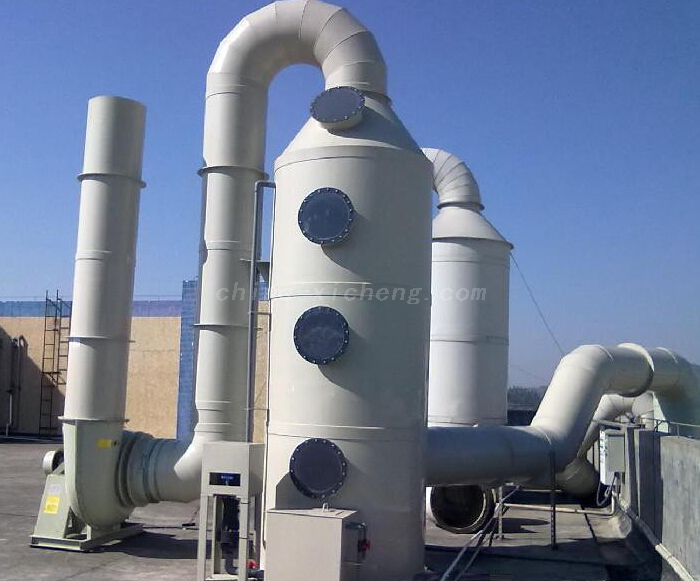 The working process of waste gas treatment equipment in food processing plants is as follows:

Under the action of the light quantum, ozone can generate a large number of active groups such as new ecological hydrogen, hydroxyl oxygen, active oxygen, and some odorous substances can also react with the active groups, and finally be converted into harmless substances such as CO2 and H2O, so as to achieve complete The purpose of removing odorous gas. Because the average energy of the photons generated by the excitation light source is 1eV~7eV, proper control of the reaction conditions can realize the chemical reaction that is generally difficult to achieve or make the slow speed very fast, which greatly improves the efficiency of the reactor.

The odorous gas is introduced into the photon purification device by the collection system. After a series of reactions are induced by the photons generated by the special excitation light source, the odorous substances are decomposed and converted into harmless components such as CO2 and H2O. The device is already a powerful device. Green environmental protection air purification device. There is no secondary pollution, and the exhaust gas after the reaction is mainly nitrogen, oxygen, water, carbon dioxide and other harmless gases.

The photohydrogen ion catalytic oxidation device can generate a large number of active groups of high-energy ion agents. Paint, benzene, toluene, xylene, resin, methyl ethyl ketone, aldehyde, additives, etc. chemically react with the active free radical groups, and are decomposed into Harmless gas carbon dioxide and water. This solution not only has high treatment efficiency, but also can effectively remove dust, paint and pollutants such as benzene, toluene, xylene, methyl ethyl ketone, aldehyde, and additives. After each treatment, it can be discharged up to the standard. The exhaust gas treatment equipment has small wind resistance and low operation and maintenance costs. , is a very advanced and superior waste gas treatment solution.