Organic waste gas adsorption treatment, which is a treatment method that physically adsorbs and collects VOC. Activated carbon, zeolite, silica, etc. are used as adsorbents. Due to its size, the pores of the adsorbent are called micropores with a diameter of 2 nm or less, mesopores with a diameter of 2 to 50 nm, and macropores with a diameter of 2 nm or more. It is the micropores that increase the specific surface area of the adsorbent and quickly adsorb VOCs. On the other hand, mesopores and macropores are effective for applications such as storing large amounts of water vapor and keeping humidity constant. It is said that large pores are effective for quickly transporting gas to the inside of the adsorbent. Generally, activated carbon has pores of various diameters ranging from micropores to macropores. On the other hand, zeolite has pores of uniform size.

When a large amount of VOC exhaust gas is generated in a factory or the like, it is expensive, and a single VOC is collected after desorption. However, if the price is cheap and various VOCs are mixed, they will be discarded after desorption, because separation and purification cost money.

Activated carbon has its own characteristics, and its use depends on the raw material, shape, manufacturing method, etc. When VOC is adsorbed in the gas phase, the following substances are generally used.

Fibrous activated carbon is used in applications that frequently repeat adsorption and desorption, such as concentrators. The fiber type is about several to 20 µm, and the raw materials include phenol, PAN, pitch, rayon, etc.

Honeycombs are used for low-concentration applications, such as air conditioning in clean rooms.

The powder is not often used for gas because it has a large pressure loss and is easy to spread. 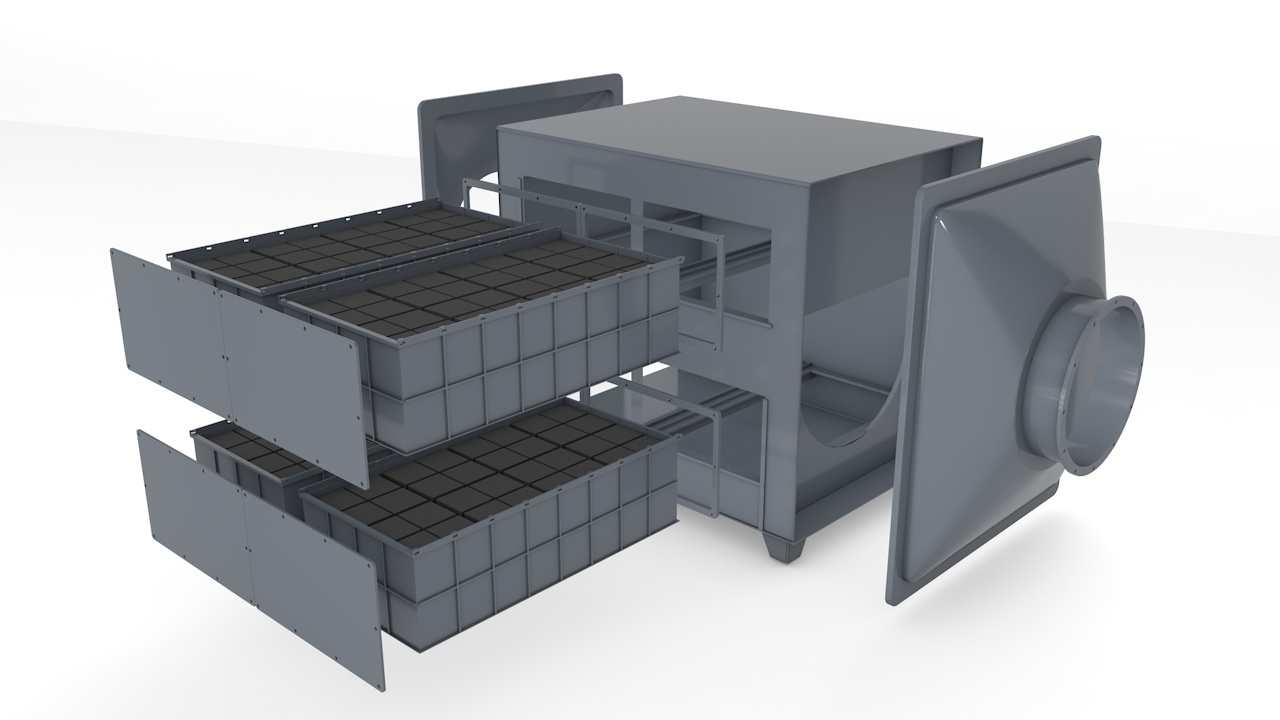 Zeolites are crystalline aluminosilicates, which are widely used as catalysts and adsorbents in the chemical and environmental fields. As far as VOC treatment is concerned, it can be used in VOC concentrators because it can produce products with a specific surface area equivalent to activated carbon and can withstand repeated use. In addition, zeolite has a uniform pore size and can use its characteristics to select and adsorb only specific gases (it can even produce activated carbon that can separate and adsorb oxygen and nitrogen according to the manufacturing method.).

Silica is used as an adsorbent in the form of silica gel, which is a gel of silicic acid. Initially, it is hydrophilic and has excellent water vapor adsorption capacity, so it is widely used as a desiccant. Currently, it is used as a deodorant for air purification materials. In addition, VOC treatment is used to adsorb and recover gasoline vapor.

It is known that mesoporous silica with the same mesopore diameter can be synthesized, but in this project, we successfully developed microporous silica with micropores by controlling the pore diameter to be even smaller. Although the manufacturing cost is still high, it is a promising adsorbent because it shows excellent adsorption performance even with a large SV value.

Apatite is a phosphate mineral and a component of animal bones and shells. It is hydrophilic and has excellent adsorption to phosphorus and other substances. The specific surface area of natural apatite is difficult to handle to 100 square meters/g or higher, and it has not been widely used for VOC purification in the air. However, it may be used for deodorization in the future.

The polymer VOC adsorbent was developed as a gas chromatographic separator and an ion exchange resin made of styrene (PS)-divinylbenzene (DVB) copolymer. Many resin-based adsorbents are hydrophobic and can be used to adsorb VOCs in the gas phase and dichloroethane and trihalomethanes contained in contaminated groundwater.