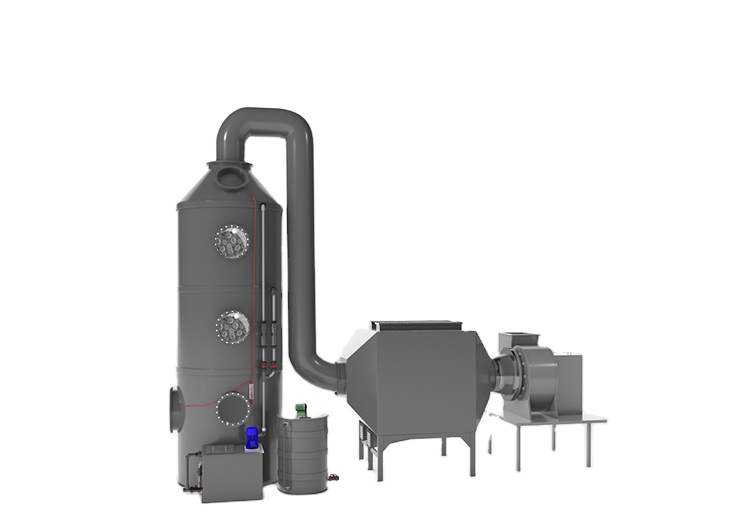 The washing tower is composed of tower body, packing, gas-water separator, liquid distributor, spray system, circulating water tank, circulating water pump, chemical liquid storage and dosing system and other units. The scrubbing tower can also be called a spray tower or a water shower tower. The packing layer in the tower is used as a mass transfer device for the contact components between gas and liquid phases. The bottom of the packing tower is equipped with packing support plates, and the packing is placed on the support plates in a random pile. A packing pressure plate is installed above the packing to prevent it from being blown by the rising airflow. The spray liquid is sprayed onto the packing from the top of the tower through the liquid distributor, and flows down the surface of the packing. The gas is fed in from the bottom of the tower, and after being distributed by the gas distribution device, it continuously passes through the gaps in the packing layer in countercurrent with the liquid. On the surface of the packing, the gas and liquid two phases are in close contact for mass transfer.

When the liquid flows down the packing layer, wall flow phenomenon sometimes occurs. The wall flow effect causes uneven distribution of the gas and liquid phases in the packing layer, thereby reducing the mass transfer efficiency. Therefore, the packing layer in the water shower tower is divided into two sections, with a redistribution device in the middle, which is sprayed onto the lower packing after redistribution. In order to prevent the gas from taking away the spray liquid, the gas-water separator at the top of the tower effectively intercepts the spray liquid. The spray liquid is recycled, and there will be some loss during use. The circulating water tank at the bottom of the tower will replenish the spray liquid in good time. The use of water shower tower with alkaline (acid) additives can not only remove smoke and dust, but also effectively remove acid mist (alkali mist) in production.

The scrubber (exhaust gas purification tower) deodorization is suitable for dust removal and deodorization in the chemical, mining and smelting, electroplating, dye, and plastic industries. Mainly used for the pre-treatment of harmful waste gas and viscous gas, it can effectively separate the solids in the gas. The polluted gas enters the spray tower from the left side, and is sprayed by the liquid mist to make the insoluble viscose particles and dust fall to the surface, and then filtered by the filter to filter out the moisture and suspended particles of the gas, eliminating the odorous and harmful gas, thereby making the gas clean Going out from the upper part, insoluble viscose particles and dust are poured into the collection tank, suspended particles go out from the overflow outlet, and the collected sediment is discharged from the sewage outlet. The scrubber can also be used in conjunction with an electronic purifier, so that the treatment effect will be better.

The porous structure of activated carbon provides a large amount of surface area, making it very easy to achieve the purpose of absorbing exhaust gas. Just like magnetism, all molecules have mutual attraction. Because of this, a large number of molecules on the pore wall of activated carbon can generate strong gravitational force, so as to achieve the purpose of attracting the paint spray exhaust gas in the medium into the pore diameter, which is physical adsorption.

It must be pointed out that the diameter of the adsorbed exhaust gas molecules must be smaller than the pore size of the activated carbon, so that it is possible to ensure that the impurities are absorbed into the pore size. Activated carbon not only contains carbon, but also contains a small amount of oxygen and hydrogen in the form of chemical bonds and functional groups on its surface, such as carboxyl groups, hydroxyl groups, phenols, lactones, quinones, ethers, etc.

The oxides or complexes contained on these surfaces can chemically react with the adsorbed substances, and thus combine with the adsorbed substances to aggregate on the surface of the activated carbon. Finally, the treated exhaust gas is drawn by the rear centrifugal fan to form a negative pressure, and is discharged into the atmosphere from the chimney 15m above the ground safely and up to the standard.